Last night The Piano Shop Bath enjoyed another sold out concert over in Bristol, this time at Bristol’s Colston Hall. This date was only added due to high demand for the other uk tour dates so to see Joanna Newsom last night in Bristol felt extra fortunate. The atmosphere in the Colston Hall bar before hand was warm and inside the hall there was a friendly atmosphere of quiet anticipation as we waited for this critically acclaimed artist to make her way on to stage. We couldn’t help noticing with interest the Steinway grand that lay to the right of Newsoms famous harp, this was a step up from the upright piano she had in Bristol during her 2010 tour.

The Bristol performance began around 9pm and it seemed like the audience barely drew breath as she played through the first six songs on her setlist. The crowed just seemed awestruck by her fierce musicality and sat in stunned silence, respectfully applauding between numbers. The Piano Shop Bath were particularly happy to see the Steinway Grand Piano getting plenty of use during the first six songs, Soft As Chalk was performed entirely on the grand piano and the classic Steinway piano sound made a really good counterpoint to the more lilting timbre of the harp. The transitions between the harp, piano and keyboard worked seamlessly for the first half of the concert and ranks up there with some of the best live music we have ever seen. The next four songs for us didn’t work quite so well and the atmosphere of rapt attention that had transfixed the audience seemed to falter slightly but luckily Newsom and her band stepped up the pace again with Cosmia and Time, As A Symptom. The final song, again performed in its entirety on the Steinway grand piano was simply stunning, no wonder it was received with a standing ovation, it really was a mesmerising performance. For the encore Newsom returned to her trusty harp and treated us to two beautiful renditions of classic songs, ending with the reworked crowd pleaser Peach, Plum, Pear.

This definitely was a memorable evening at Bristol’s Colston hall and we look forward to many more. At the piano shop bath we were particularly interested to witness the prevalence of songs in the setlist that Newsom performed on the piano, for someone dubbed ‘the hippest harpest alive’ there was certainly a lot of piano action going on last night and that was really no bad thing. The Piano Shop Bath were really looking forward to last nights gig at the colston hall but last night surpassed our highest expectations. Joanna Newsoms tour continues in Birmingham and London, NME dubbed Joanna Newsom a gig you shouldn’t miss and after last nights performance at the Colston Hall in Bristol we can only agree. 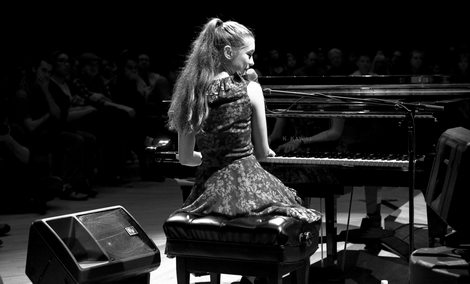