A year or so back I walked out across the pitch at Bath Rugby Club to enter a large tent that was staging musical acts, as part of Bath Music Festival. It was a dark, drizzly night and we simply went along something listed as ‘Gypsy Jazz’. What we actually saw was the vibrant and exciting music of ‘Django a la Creole‘, led by the extremely talented clarinet player, Evan Christopher. It was a revelation of an evening and left a lasting impression on me. So when I saw the group returning for another gig at Wiltshire Music Centre in Bradford on Avon, I snapped up tickets straight away.
Evan Christopher has lived in New Orleans for some years before emigrating to Paris after the devastation of Hurricane Katrina. With this background and new surroundings, Django a la Creole was founded, inspired by the collaboration of Django Reinhardt and other top musicians from Duke Ellington’s big band, most notably clarinetist Barney Bigard. Django a la Creole can be described as the gypsy jazz traditions of legendary guitarist Django Rheinhardt, blended with Creole blues and rhythms, the hallmarks of New Orleans Jazz. Even that description doesn’t entirely do justice for the coming together of four highly skilled musicians, creating waves of colour and textures over pulsating rhythms. It is simply something you have to see for yourself.

The man himself is softly spoken and charming, and between numbers much reverence is given to the musical greats who inspired the music of Django a la Creole. But make no mistake that when the music begins, his clarinet playing takes centre stage and has the hall hanging on every note. There is fluidity and virtuosity to Evan’s playing, but also a real palette of textures, from breathy low notes to scorching highs, demonstrating to anyone with little knowledge how wonderfully expressive the clarinet can be. Grounding all of this is the driving rhythm section of Dave Kelbie on guitar and Sebastien Girardot on double bass, whose timbres evoke so much of that ‘Hot Club’ sound, while also providing something fresh and visceral for the audience. The almost telepathic musicianship they displayed as a rhythm section obviously fed into Evan’s improvisation and gave him the freedom to produce some really special moments.

On the night we had a double treat of not only the regular line up of Evan Christopher, Dave Kelbie and Sebastien Girardot, but also the guitar and banjo prowess of Don Vappie. Among those of us who are not jazz aficionados we were probably unaware of Don Vappie, but it took just a few notes from the man to realise the special nature of the occasion. Don is a world class musician from New Orleans who brings the musical traditions of the great city to the stage. There was clearly an extra level of musical depth that Don brought to the set: his virtuosic playing on the guitar commanded much respect from the audience, and when he switched to the banjo, the ambience of that New Orleans sound just seemed to be heightened. Probably one of the most tender moments of the evening was Don singing the classic ‘Careless Love’, where his heartfelt voice weaved beautifully with the flowing clarinet lines of Evan Christopher.

As a side note, it was also very refreshing to hear the majority of the instruments unamplified. So much music today is conveyed to our ears through amplification, and the nuances of an instruments’ sound in inevitably lost. The style of music being played became even more intimate, and this was no doubt aided by Wiltshire Music Centre’s excellent acoustics.

So check Django a la Creole out, preferably live first, but if you can’t make a date on the current tour, their live cd captures much of what I have written about, Django a La Creole, Live!

In Wiltshire and the surrounding areas we are slightly spoilt for having a great music venue in the Wiltshire Music Centre. All year round their program is packed with leading… 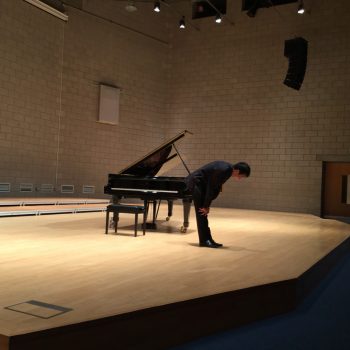 Local piano teacher and Piano Shop Bath team member Edward Bettella, gives an account of his recent trip to New York City and discovering the history of Jazz in Harlem….