Pianos have for years been the focal point of homes, churches and many other settings where music was needed for entertainment. With the introduction of the gramophone in the 1920s, pianos sales started to decline as a cheaper source of music became available. Going into the 21st century, digital pianos from manufacturers like Kawai, Roland and Yamaha have rapidly replaced acoustic pianos in many homes and schools. They are considerably cheaper and in the last ten years the underlying technology in a digital piano has massively improved. The tone and touch of a good model of digital piano is now very acceptable to many players, and makes learning the piano for beginners much more affordable.

The result is a mass of old pianos produced in the last 100 years that are rapidly deteriorating and becoming unplayable. In London in 1910, there were as many as 300 companies involved in manufacturing pianos, turning out thousands of pianos every year. Forwarding on to today, many of these pianos now cost considerably more to restore than to scrap. Here at The Piano Shop Bath we frequently get enquiries from families wanting to get rid of an old piano, but most of the time they are virtually worthless.

However a non-profit organization in the US called ‘Pianos for People’ has been set up to address this burgeoning issue. They restore and recondition old pianos to working order, and then deliver them free of charge to deserving families and groups who would otherwise not be able to afford a keyboard instrument of any type.

The idea began when advertising executive Tom Townsend lost his son in a tragic accident. Both father and son loved playing the piano, and so as a tribute to his late son, Tom approached Jackson Pianos LLC and presented the idea of providing unwanted pianos to those in need. Jackson Pianos LLC, itself a restorer of old pianos, were immediately interested. Combined with prominent local piano teacher Patricia Eastman, Pianos For People was born.

To learn more about Pianos For People, check out their website here www.pianosforpeople.com

You can also watch this interesting video below: 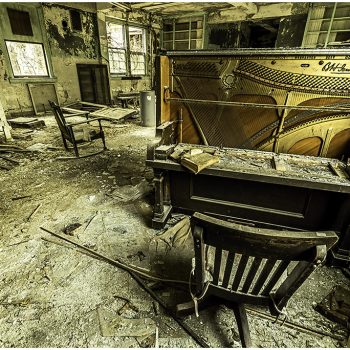 Here at The Piano Shop Bath we found this excellent gallery of pianos images on Classic FM’s website. The haunting images show old, broken pianos in a variety of settings,…

Our new website goes live @ The Piano Shop Bath! Enjoy browsing our new, pre-owned and restored pianos. Call us on 01225 427961 or email hello@thepianoshopbath.co.uk if you’d like more information about…