In anticipation of the arrival of the Bösendorfer 170 grand piano to the Piano Shop Bath, we have put together a short illustrated history of the great piano manufacturer to explain what makes these pianos so special.

The Founders and Owners

Bösendorfer is one of the oldest piano manufacturers and was established in 1828 by Ignaz Bösendorfer. It has a history of great associations; in 1830, it was granted the status of official piano maker to the Emperor of Austria. Ignaz’s son Ludwig Bösendorfer took over in 1859. In 1909 the company was sold to the Hutterstrasser family, after which it passed to the Jasper Corporation in 1966, parent company of Kimball Pianos. Bösendorfer was purchased by BAWAG PSK Gruppe in 2002 before all stock was sold to Yamaha on 20 December 2007. The company is still located in Vienna and you can watch this insight to the painstaking production process here:

Composer and pianist Ferruccio Busoni wanted to transcribe an organ piece that went to the C below the standard keyboard. He approached Bösendorfer and the result was the Imperial Grand Model 290, which has 97 keys (eight octaves). The piano was such a success that it soon became a part of the established product line. Extra strings were also added to Bösendorfer’s other line of instruments such as the 225 model, which has 92 keys. The extra keys, all at the bass end of the keyboard, were originally hidden beneath a hinged panel mounted to prevent their being struck accidentally during normal playing. Now they simply have the upper surface of the extra natural keys finished in matte black instead of white to differentiate them from the standard 88.

The addition of these extra, thicker strings gave an unexpected result to the rest of the piano repertoire. Simply through mutual resonating whilst other strings are being played, they contribute to the piano’s overall sound, contributing additional body to the tone. On any model including the 88 key models, Bösendorfer pianos have more resonant bass strings than other pianos. The Bösendorfer sound is usually described as darker or richer than its competitors and is capable of high yet balanced volumes, perfect for the auditorium.

Bösendorfer makes seven models of grand piano and two upright pianos, with the Imperial Grand 290 being one of the world’s largest pianos. Here at the Piano Shop Bath we are fortunate enough to have the boudoir sized grand, the Bösendorfer 170. This provides all the tonal richness of a Bösendorfer but at a size more comfortable for the front room!

The great Franz Liszt was one of the earliest champions of Bösendorfer pianos, finding them to be one of the only instruments that were capable of withstanding his tremendously powerful playing. He once wrote “The perfection of a Bösendorfer exceeds my most ideal expectations…” In the picture below you can see a typical setting of Liszt entertaining Emperor Franz Joseph and Empress Elisabeth, at the helm of his treasured piano. 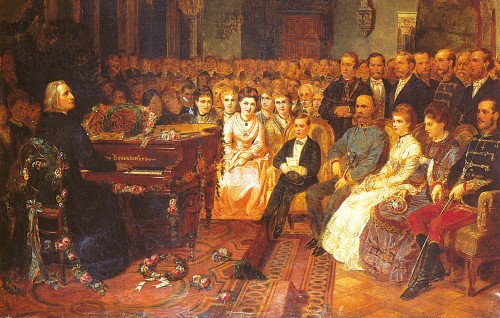 Ukrainian pianist Valentina Lisitsa is one of the latest high profile supporters of Bösendorfer pianos and has released a new video set of recitals using the 97-key Bösendorfer Imperial Grand. Here she demonstrates the full potential of those extra notes, transposing what Liszt wrote down the octave, something you would not be able to do on any other piano. The tonal result is quite breathtaking. 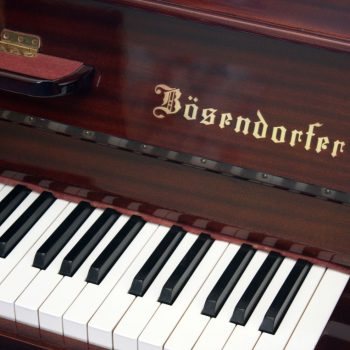 Most people who have any familiarity with pianos will have heard the name Bösendorfer  spoken with respect and reverence. Considered alongside Steinway, Bluthner and Bechstein to be amongst the best… 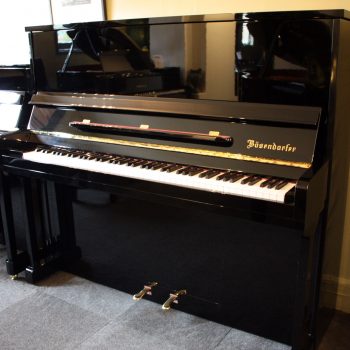 February 14, 2016Bosendorfer, Pianos in stockBosendorfer, Bösendorfer pianoThe Piano Shop Bath
Bösendorfer Pianos Bösendorfer pianos have long been one of the great piano manufacturers in Europe, with its founding in early 19th century Vienna, the heart of culture for several hundred years....
Read More 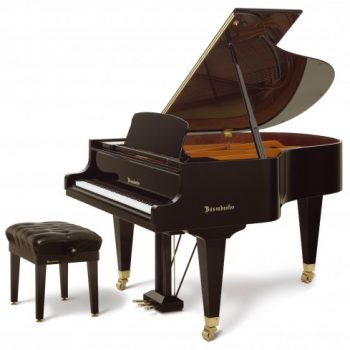 We have been extremely fortunate to receive some excellent pianos here at The Piano Shop Bath, giving customers the full range of pianos to base their decision on. At the…