Kemble Pianos was a British piano manufacturer, active from 1911 until 2009 (owned by Yamaha since the mid-80s). Almost all Kembles are uprights, with a small number of baby grands built, mostly pre-war. Kemble pianos are best known for building small modern and compact pianos of very high quality, and overcoming many of the difficulties associated with building very compact instruments. The Kemble ‘Compact’ and ‘Minx’ models are among the only ‘Compact’ or ‘Miniature’ pianos of good quality. We occasionally have smaller refurbished Kemble pianos in stock, if space is very tight these can provide a practical alternative to a high-end digital instrument, though of course the tone quality suffers due to the shorter strings and smaller soundboard.

In the Yamaha-owned period, the Kemble factory produced some Yamaha pianos as well as their own, designated with an ‘N’ after the serial number; these instruments are of high quality, as good as their Japanese-built counterparts.

Kembles were always well-designed and sturdily built, and tend to last well; we usually have at least two Kembles in stock, one more modern example from the Yamaha era and one older refurbished instrument. 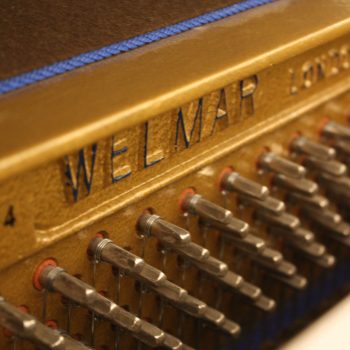 A Trio of Great British Pianos

Looking to buy a great secondhand upright piano with character? You should check out our latest trio of British made upright pianos, from three very respected names: Broadwood, Kemble and…