Blüthner are on the big four piano manufacturers and artists who were particularly fond of Blüthner pianos include Willhelm II, Emperor Franz Joseph I, Johannes Brahms, Gustav Mahler, Liberace, Béla Bartók, Claude Debussy, Dodie Smith, Max Reger, Richard Wagner, Johann Strauss, Pyotr Ilyich Tchaikovsky, Dmitri Shostakovich and Sergei Rachmaninoff. One Blüthner piano owned by the Abbey Road Studios in London was even used on some tracks of The Beatles’ Let It Be album

Julies Bluthner created his piano workshop in 1853 with the help of three skilled craftsman.  By 1900 Bluthner had become the largest manufacturer of pianos in Germany, producing over 5000 pianos annually.  Bluthner created some new mechanics for inside their instruments like Aliquot String, a fourth string that vibrated and was tuned in unison, along with angle cut hammers and the round like soundboard created a unique sound for all Bluthner pianos.  Bluthner produced four types of upright pianos the straight-strung, overdamper; the overstrung, overdamper; the straight-strung underdamper & the overstrung over damper.

As pianoists, we have all loved playing the Bluthner Style 8 1895 Grand Piano in our showroom. With a Satin Rosewood finish this Bluthner Style 8 Grand is 6 ft 3in and features a  Aliquot string. This particular instrument was restored circa eight year ago to a very high standard and it features an beautifully ornate music desk very fitting of this period. 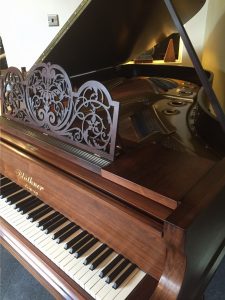 The overall sound of the Style 8 Grand is one of a warm and rich tone. This is especially true when the extreme registers (low end and top end) are being played, which have great definition and clarity.

The touch is a medium feel which allows the pianist to play very fast passages with accuracy and the keyboard is such that it seems to help the fingers connect well with the keys to help play with great feeling and emotion.

The natural wooden case will also go with most interiors of any house – this is a very grand instrument indeed.