The Kawai ES7 features 32 high quality sounds and a versatile accompaniment system, allowing the player to play along with a small backing band. Such systems have moved on rapidly in recent years and now represent a very useful aid to practice. Other features include sophisticated, user-friendly recording technology, easy computer connectivity and the option to modify the sound and feel of the instrument through effects, amplifier simulation and Kawai’s ‘Virtual Technician’ system, allowing the player to set up the characteristics of the keyboard action to suit personal preference – light or firm touch, bright or warm tone etcetera.

The ES7s stylish, compact case is available in black or white and is designed to sit either on a traditional ‘X’ style keyboard stand or to use Kawai’s own integrated solid stand, in black or white, for a more classic look. The Kawai ES7 is supplied with a separate sustain pedal, but a full grand-style pedal board is available to fit the Kawai stand.

We recommend the Kawai ES7 to all players, whether they require a portable, professional standard instrument for public performance, a high-tech MIDI-enabled workstation or simply a compact digital piano with the sound and feel of a high quality acoustic. The ES7 is our hire instrument of choice, the display model in our showroom was used as Andrei Gavrilov’s practice instrument before his recent Guildhall concert and is available for short term hire. 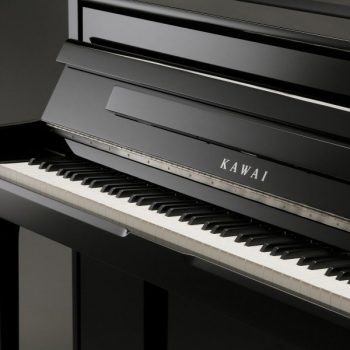 Established way back in 1927, Kawai has been manufacturing high quality upright and grand pianos, electronic keyboards and synthesisers for nearly 90 years. Based in Shizuoka, Japan, Kawai are recognised…

Kawai Acoustic and Digital Pianos at The Piano Shop Bath

Kawai Musical Instruments was founded in Hamamatsu, Japan, in 1927. The company was founded to further the development of the piano through advances in technology. To this day, Kawai acoustic…